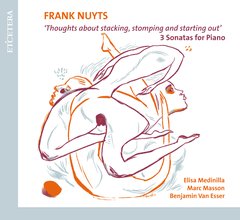 ‘Thoughts about stacking, stomping and starting out’.

‘Thoughts about stacking, stomping and starting out’. Frank Nuyts was born in Oostende in 1957. He studied percussion at the Ghent Conservatory and composition with Lucien Goethals at the Instituut voor Pyschoacoustica en Electronische Muziek (IPEM). In 1989, together with Iris De Blaere, he set up the 7-member cross-over band Hardscore, recording four CDs and undertaking international tours. Since that time he has produced an extensive oeuvre, characterised by a postmodernist idiom. Frank Nuyts teaches composition at the Ghent Conservatory. Benjamin Van Esser studied with Jan Michiels at the Royal Conservatory of Brussels and also made an in-depth study of the piano works of Olivier Messiaen under Håkon Austbø at the Amsterdam Conservatory in 2004. Benjamin Van Esser also performs with various ensembles and orchestras alongside his solo work. Elisa Medinilla concluded her formal training with distinction under Boyan Vodenitcharov at the Royal Conservatory in Brussels. She has subsequently worked with Luk Vaes and Ian Pace and has also taken part in master classes under Menahem Pressler, Daniel Pollack, Evelyne Brancart and Andreas Staier. She has been a member of the contemporary music ensemble Nadar since 2006. Marc Masson gained his master's degree in piano with distinction under Claude Coppens, also studying harmony, counterpoint and fugue under Mieke Van Haute. Prizes he has won include the Bach Prize (Aalst, 1993) and the Board of Governors' Prize ‘De Link' (Tilburg, 2002) for the best performance of a piece of contemporary music. He currently teaches practical harmony at the Ghent Conservatory and piano at the Deinze Music Academy. 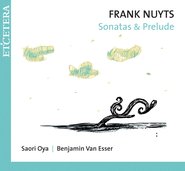 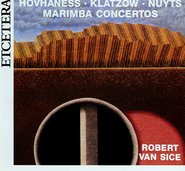