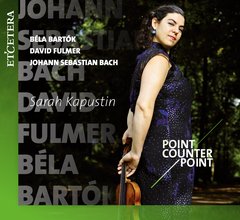 I am proud to present to you my debut solo album, featuring music for solo violin from three different centuries and countries! Its title, Point Counter Point, is borrowed from the eponymous 1928 novel by Aldous Huxley. And what is counterpoint exactly? The official definition is “the relationship between voices which are interdependent harmonically yet independent in rhythm and contour”; essentially it’s an artistic weaving of characters, comparable to the symbiosis of story lines in Huxley’s novel, or the refined combination of contrasting flavors in gourmet cuisine.

The violin is by nature a melodic instrument, but on this disc it is featured in a more complex, contrapuntal role. Juggling up to four different voices at once is an enormous challenge for the violinist (and even the listener): it demands acrobatic ability which serves the artistic needs of the music and the story that it needs to tell, rather than virtuosity for virtuosity’s sake. The specific combination of works on this disc offers the listener an exploration of the magical possibilities of the violin.

For this album, I am combining two giants of the solo violin repertoire (Bach’s Sonata in C Major, BWV 1005 and Bartók’s Sonata for Solo Violin) with a newly commissioned work by David Fulmer. The Bach and Bartók sonatas have quite a lot in common: they are two of the most ingenious and technically challenging works ever written for the violin, and they also happen to be two of my favorite pieces to play. Furthermore, one could not have come into existence without the other: Bartók attended a concert where the great violinist Yehudi Menuhin performed the Bach C Major Sonata, and this experience inspired the Hungarian composer to write his own solo sonata modeled after the Bach. This album also includes the world premiere recording of Sirens for solo violin, written for me in 2016 by the young American composer David Fulmer. The process of working on Sirens with David was fascinating and very inspiring. His approach to our collaboration was very natural and unassuming, and I felt from the first instant that we were speaking the same musical language. The result is a work for solo violin which is truly unique and represents the ‘cross-pollination’ of two multi-faceted artists. 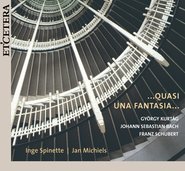 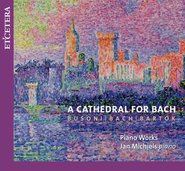 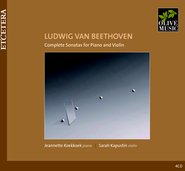