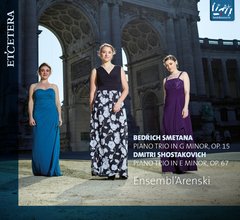 Dmitri Shostakovich composed his Piano Trio No. 2 in E minor, Op. 67 in the wake of tragedy: on February 11, 1944, one of his closest friends had died suddenly of a heart attack. His creativity paralyzed by grief, Shostakovich did not complete the piano trio until August of that year. Shostakovich, however, was not the first composer to write an elegiac piano trio in memory of a loved one. In 1882, Tchaikovsky dedicated his Piano Trio in A minor, Op. 50 to his departed friend and mentor, Nikolay Rubinstein, and when Tchaikovsky passed away in November 1893, Rachmaninoff paid tribute to the composer with his Trio élégiaque No. 2. A year later, Arensky composed his own elegiac trio in memory of cellist Karl Davydov. This apparent musical tradition seems to have formed its roots in 1855 with Smetana’s Piano Trio in G minor, which he composed following the loss of his daughter. Although nearly a century separates Smetana’s Piano Trio from that of Shostakovich, the two works both communicate the same raw emotions—deep, debilitating sadness, flashes of anger, and precious moments of hope—that are inseparable from mourning.

Ensembl’Arenski
The first meeting between Stephanie Proot and sisters Claire and Aurore Dassesse took place in the fall of 2012, when they were invited by concert promoter Euterpe to interpret the Piano trio in d by Anton Arensky. The concert was a resounding success, after which the three ladies decided to continue the casual collaboration as a permanent ensemble. Bearing in mind their first joint achievement, Claire, Aurore and Stephanie baptized the chamber music group Ensembl’Arenski, a well-chosen name that equally allows them to perform in alternate combinations. As a piano trio, the three musicians take a fresh look at the larger repertoire, and at the same time, they introduce the public to less well-known works. Looking for the perfect interplay, Ensembl’Arenski went within the walls of the Brussels Queen Elisabeth Music Chapel to study with the renowned Artemis Quartet. The group has already appeared in the program books of numerous national and international concert associations, including the Bijloke, Festival Musiq3, the Musical Instruments Museum and the Concertgebouw Brugge. Ensembl’Arenski was laureate of the 2017 Supernova competition, giving them a helping hand for a concert tour through Belgium and the publication of a first CD. The three members of the ensemble each bring a lot of individual musical experiences to share with their companions, experiences gained during their studies, through impressive competition track records, when playing numerous concerts and thanks to inspiring encounters with colleagues worldwide. 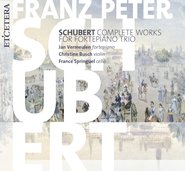 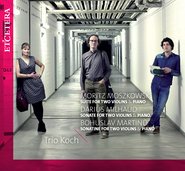 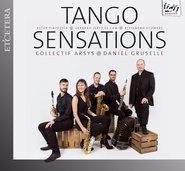