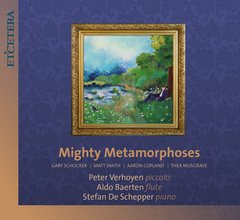 Mighty metamorphoses
21th-century repertoire for piccolo and flute between skit and sérieux, neo and new

With a first documented use case dating from the 18th century, the piccolo truly is the ‘little brother’ of the (much older) transverse flute. While the instruments are very similar where technique, mechanics and fingering are concerned, their scope is very different. Initially used for ‘special effects’ in symphonies and operas, the piccolo became a full member of the orchestra in the late 19th century only. It would take until the end of last century for piccolo-playing to become an established discipline, at which time most professional orchestras employed a specialized ‘piccoloist’. As a solo and chamber music instrument, the piccolo’s struggle to catch up was even more strenuous, as its specific sound idiom (softly spoken in the low range, shrill and piercing in its highest tones) presents quite a challenge when it comes to realizing the instrument’s expressive potential.

The chamber music repertoire for piccolo therefore has remained rather sparse. Gary Schocker (°1959), a flutist who has worked with the New York Philharmonic and the Philadelphia Orchestra and ranks among the best of his generation, has firsthand experience with fruitless searches for interesting material. Luckily, Schocker is a composer as well, possessing all the skills and tools needed to relieve such distress. Piccolo sonata n°3 was written in remembrance of Carl Hall, first piccolo of the Atlanta Symphony Orchestra. The first bars of the piece contain the nucleus of what turns out a powerful, somewhat serious, yet never gloomy composition, that - adhering to the genre’s traditional outline - unfolds in three (untitled) parts. The first movement prompts the performer to make a statement: a show of self-confidence and craftsmanship, allowing for an adequate rendering of the rhythmical intricacies, super-speed runs and varied articulation. In a melodic interludium, the lyrical qualities of the piccolo player are put through the litmus test as well. In the second movement, swagger and optimism make way for an endearing cantabile, surrounded by opulent harmonies: a déploration void of desperation, in the guise of a charming cantilena. The contrast with the final part couldn’t be more striking: a compact, resolute Presto in a fast 6/8 metre, in which the piccolo is endowed with staccato and Flatterzunge and shown all corners of the score. 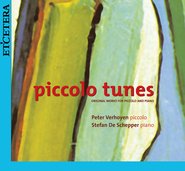 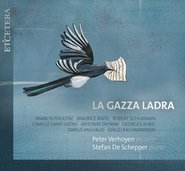 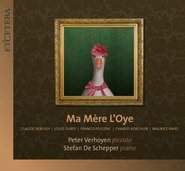