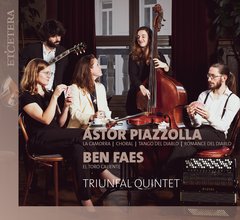 The Triunfal Quintet is a Belgian quintet dedicated to the tango nuevo and everything inspired by the genre. The group is remarkable not only for its intense ensemble playing but also for its daring and its dedication to the tango repertoire. The Triunfal Quartet released its first EP a few years ago but now has a greater aim in view: a full CD with some of Astor Piazzolla’s lesser-known masterpieces, supplemented with the passionate El Toro Caliente by the Belgian composer Ben Faes.

La Camorra (1, 2 and 3)
Piazzolla seems to have created almost a symbiosis of his previous compositions in this three-movement work for quintet. Each instrument is shown to its full advantage and is allowed to shine separately as well as in dialogue. The title refers to the eponymous Italian mafia, although the connection is not immediately clear — it may have something to do with the music’s capricious unpredictability. Piazzolla displays his genius fully in this absolute masterpiece; it is a profound and varied work, with long-spun melodies, extreme counterpoint and the characteristic harmonic turns that make Piazzolla’s music go straight to the heart.

Tango del Diablo - Romance del Diablo
Piazzolla wrote his Milonga and Muerte del Angel to honour angels, although the devil has also seemed to inspire him. His Tango del Diablo is one of the most forbidding pieces that he ever composed, with a very tart introduction that makes sparks fly; the listener feels as though he is walking over hot coals for the rest of the piece as well. In the Romance, however, Piazzolla shows the devil’s softer side. He picks up the pieces and whispers the sweetest of promises... who could resist that?

El Toro Caliente
Ben Faes wrote El Toro Caliente for his own Orquesta Tanguedia. The violin plays a starring role, first in the opening cadenza, and then in spinning out the ever-recurring melody that never sounds the same twice. An enormous tension builds up until everything is brought to a halt by a breath-taking guitar solo, although the peace is short-lived. The other musicians become more and more restive and ensure that the end of the piece becomes a whirlwind of sound.

Choral
Calm returns with the subdued Choral, in which the guitar, accordion and violin unite in prayer. The double bass joins them a little later, and a beautiful guitar solo comes into its own over a supporting bass line. We have the impression of an ancient pain, a quietly sombre mood that repeatedly threatens to burst open but never quite does. All hurt is past, and we have made our peace with it. 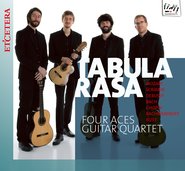