Born in Warsaw, she studied harpsichord and organ in Poland, Finland, Italy and Switzerland. In 2010 she completed her studies in the class of Andrea Marcon, harpsichord at the Schola Cantorum in Basel with distinction. She is a laureate of the International Johann Sebastian Bach Competition in Leipzig in 2010 for harpsichord (2nd prize) and at international organ competitions (including Toulouse 2008, Innsbruck 2007, Borca di Cadore 2007 Carunchio 2006), moreover, she won a prize at the the Polish Government competition for young Polish artists in 2005. Magdalena Malec occurs as a soloist throughout Europe, including the Ruhr Piano Festival, the Resonanzen in the Konzerthaus in Vienna, the Bach Festival in Leipzig, the Early Music Festival in Utrecht, at the Freunde Alter Musik Basel and the Thuringian Bach Weeks. She is regularly invited as a chamber musician and has collaborated with ensembles and orchestras such as The Hilliard Ensemble, La Cetra Basel Baroque Orchestra, Capriccio Basel, La Scintilla, Sinfonieorchester Basel, Bern Symphony Orchestra and I Pomeriggi Musicali. She has also contributed to several CD and radio recordings. 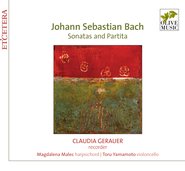