Arno Bornkamp has won many awards, including the 'Silver Laurel of the Concertgebouw' and the 'Netherlands Music Prize' among the most noteworthy. The latter enabled him to go abroad, studying in France with Daniel Deffayet and Jean-Marie Londeix, and in Japan with Ryo Noda as well as working with composers such as Luciano Berio and Karlheinz Stockhausen. Since 1982, he has been part of the Aurelia Saxophone Quartet where he plays tenor saxophone with Johan van der Linden on soprano saxophone, Niels Bijl on alto saxophone, and Niels Merwijk William on baritone saxophone. Among others, he recorded the cd "Adolphe Sax Revisited" with pianist Ivo Janssen, who he has been performing with since 1983. In this cd he used period instruments, which were made by Adolphe Sax. He has given many masterclasses across the world and has been the professor of saxophone at the Conservatory of Amsterdam since 1995. Source: Wikipedia 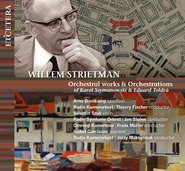