organ Late in 1997, Jos van der Kooy (Haarlem city organist), Piet Kee (organist and composer), and Wim de Ruiter (composer) drafted a proposal which they submitted to the municipality of Haarlem, requesting money in order to commission five compositions which were to be performed over the years 1999-2005. The works were to be specially composed for the renowned Müller organ, located in the Great, or St. Bavo Church, and they were to be performed by the city organist. 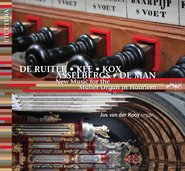