piano Karel Košárek has won a number of international pianocompetitions, including the Walter Naumburg Piano Competition in New York (1997). Recitals given in the past seasons in New York, Dallas, Palm Beach, Calgary, Tel Aviv, and St. Petersburg, and concert appearances in Europe and Japan document Karel’s international musical involvement. He has also appeared at international music festivals and has performed with leading orchestras. He has frequently collaborated with the mezzo Magdalena Kožená. Prague Chamber Orchestra boasts a unique position, for similar formations are quite rare even worldwide as performing music without a conductor requires a special rapport of all orchestra members. 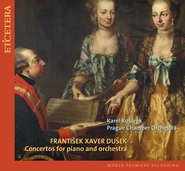